Why Not All Bread Is Equal 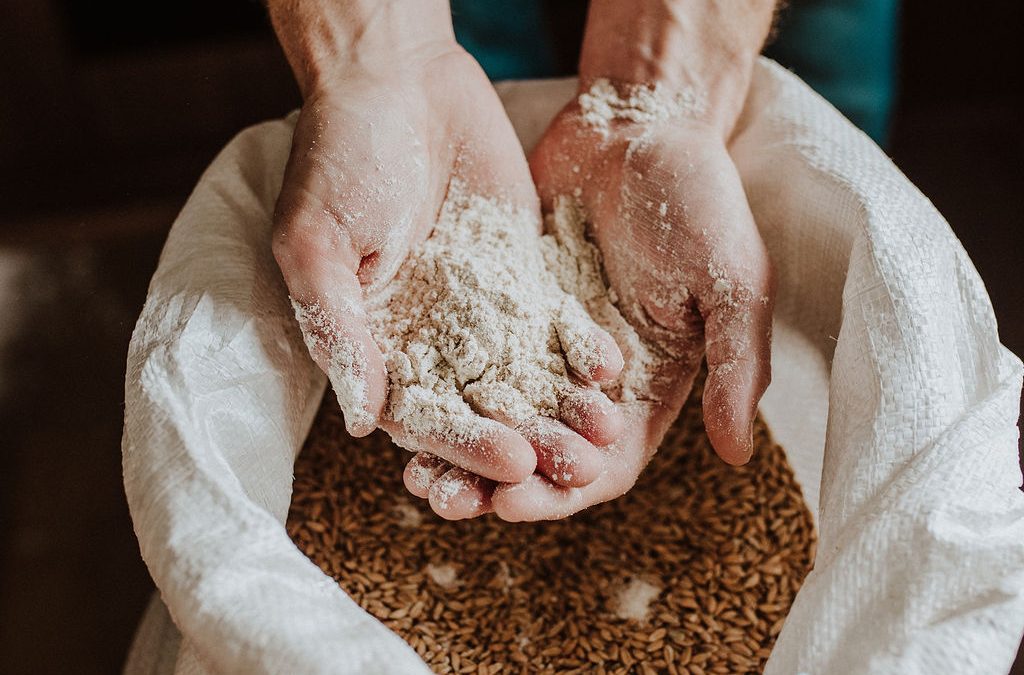 For thousands of years bread was enjoyed as a healthy staple food. So where did it all go so wrong? Today, many people approach the decision to have a slice of bread like walking through a minefield – with great caution and uncertainty- and rightly so! Gluten intolerance, IBS, bloating and so many more symptoms arising from having bread is no joke! Because bread has become such a controversial topic in our modern age, I went looking for answers in another age, and what I discovered was literally life (and gut)-changing!

Let’s look at some of the modern interventions implemented in the production of bread to help understand why so many of us can’t digest commercial gluten-containing products, and more importantly how we can get back on track, and enjoy grains the way nature intended.

Compromising farming practices and seed quality (seed and soil):
Let’s start at the very beginning, before we even have grain to mill into flour we need to look at what the grain plant absorbed and had access to while it was still forming in the soil.

Mainstream farming practice, in South Africa and abroad, includes the use of synthetic fertilizers and powerful herbicides. The soil is depleted of minerals and micro-organisms by the application of this technology, meaning plants can’t produce all the nutrients they should. Sick plants make people sick. Old permaculture practices and resting of the land is a rare practice nowadays. Modern wheat seeds are also hybridized, meaning inferior nutritional profiles and unbalanced properties. We believe a better bread can be baked using ancient grains farmed with care – which is why we use imported Spelt seeds to bake bread, like in the old days.

Bulk storage procedure (silo):
Once harvested, grains are typically stored in a silo, where it is chemically fumigated with powerful toxins to ward off insects. These toxins are absorbed in the wheat and can wreak havoc on your digestive tract, even in minute amounts. Our seeds pass the test for fumigants and chemical agents.

Wheat processing (separation):
Wheat seeds consists of three parts, the germ (actual ‘seed’ containing all the nutrients), endosperm (white starchy component which also contains gluten) and bran (fiber-rich encasing) as per the image below. It saddens us to tell you that wheat is separated in these three parts and is no longer a whole food. This is achieved by removing the bran and the germ from the grain kernel in modern milling and separation facilities. Only the energy component, the endosperm, is used to manufacture white flour, which is the basis for essentially all commercial baking. The simplified illustration below shows that we in fact eat the seed’s food (endosperm), and not the actual seed (germ) or the fiber. Humans cannot digest gluten, but wheat germ can. This is what happens during germination – seed germ grows into small plants by digesting the gluten containing endosperm. Hence, the enzymes necessary to digest gluten is found in the germ which is not present in commercial bread (and on the rare occasion that it is, it’s not fresh – wheat germ goes off very quickly). If you eat the germ, you eat the tools necessary to digest the gluten as well. This is why we stone mill whole wheat kernels into the mixing bowl to produce fresh, true germ-containing whole wheat flour. 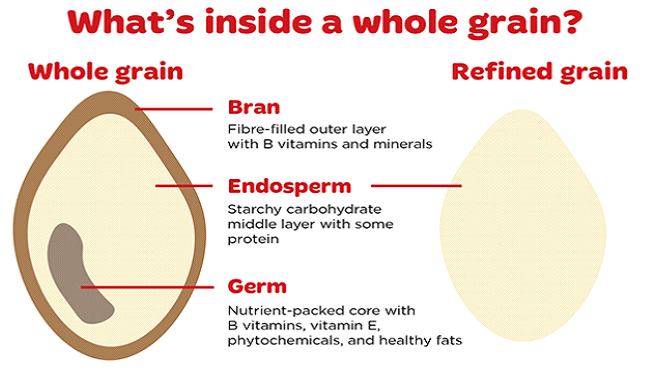 Governmental food regulation (standards)
If you think only white bread is manufactured using refined flour, think again. Food manufacturing standards allow industry to label bread made with white flour as “whole wheat brown bread”, by simply adding a marginal amount of fiber and no germ. Essentially all breads in almost all shops are made with refined flour: simply check the ingredients. We instead bake bread the same way humanity has done from the beginning of time until the first industrial revolution – before any of these standards were invented.

Stone milled and sourdough
These terms have also become abused in modern baking. Most modern processed flour is indeed stone milled – what they have not told you is that in most cases they only stone mill the endosperm. So the process adds no value if the input product is refined and toxic to begin with. The same applies with sourdough, which is a wonderful process and nature’s only way to leaven bread (using wild yeast); it doesn’t mean much however if the flour used to produce the bread is not whole wheat and freshly milled. Industry are quick to use these terms, but don’t be fooled. We uniquely use ancient wheat seeds, stone milled directly into the mixing bowl and slow fermented with a sourdough culture since the entire process must cohere for best results – no exceptions.

Bad baking (shortcuts):
Instead of bread having only 3 or 4 ingredients, conventional bread typically has 10 or more. An array of chemicals, enzymes, flour ‘improvers’, preservatives, sugars, yeasts, colourants, etc. are added for improved appearance, texture and shelf life, not all of which are legally necessary to be on the label. Baking tins with toxic non-stick coatings also reduces production time. We have to emphasize that the use of instant yeast also bypasses nature’s processes of slow fermentation in which the bread (and gluten) is predigested and prepared for human consumption. Instant yeast is an unnecessary shortcut which comes at a price your digestive tract has to pay. We find it better to bake bread without the use of any toxic chemicals – the way nature intended.

At Freddie’s we make a point of doing things the right (and sometimes longer) way. Whether it’s the seed, soil, silo’s, separation, stone milled, sourdough, standards or shortcuts – we’ve done the navigation of the minefield for you so you can enjoy what everyone instinctively knows is meant to be a wonderful staple: Bread – try the original version for yourself. 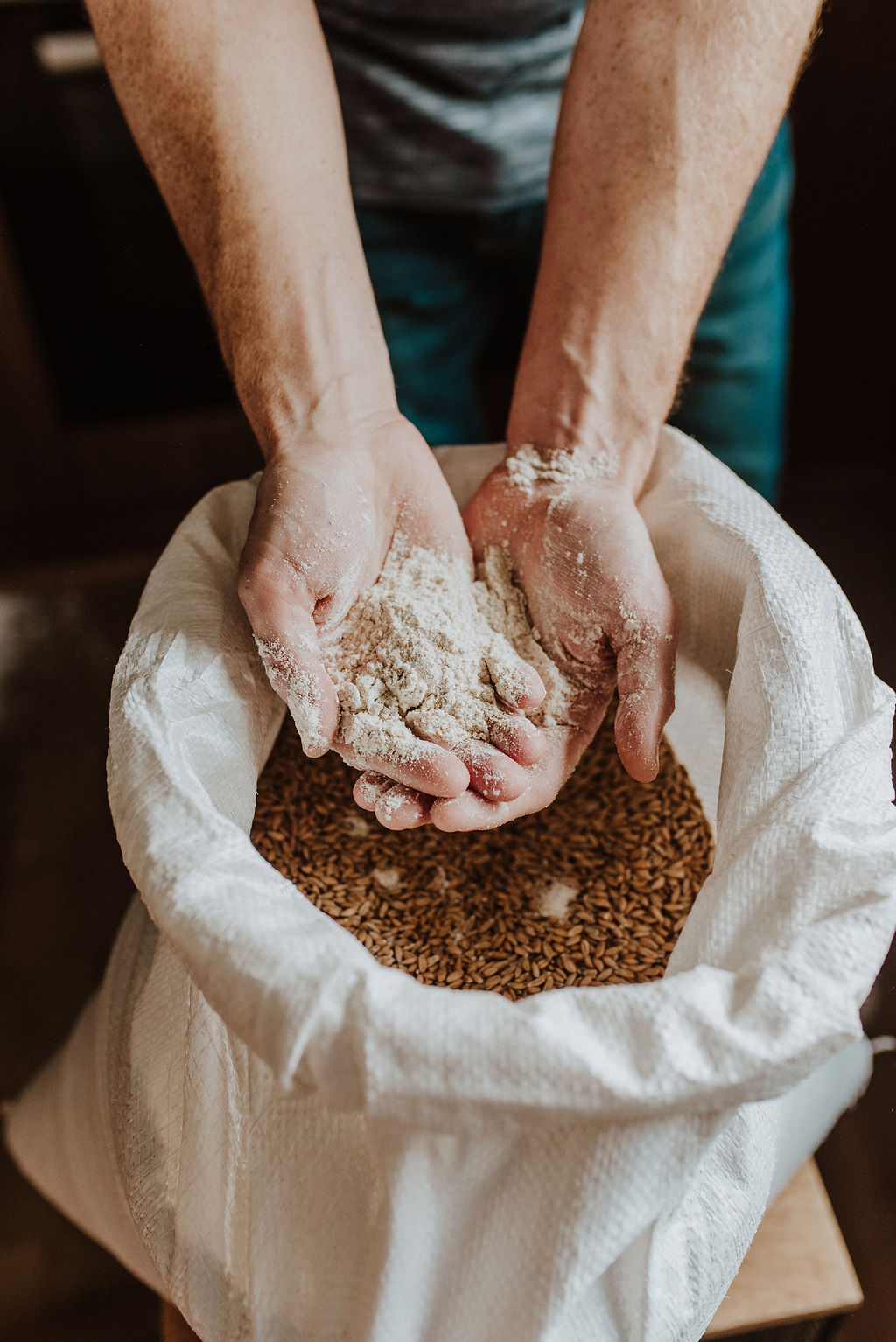 Do you have any questions or thoughts? I’d be so happy to have a chat with you, in fact it would be my privilege! I’ve done thousands of hours of research on the topic and have been creating whole flour products that many gluten-intolerant, diabetic (including my own wife) and other food-intolerant people have been able to enjoy, symptom free! Send me a mail today.

Yes! I want to talk